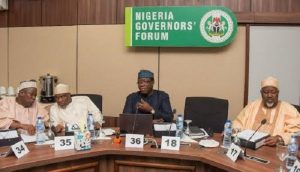 The Chairman of the Nigeria Governors’ Forum and Ekiti State Governor, Kayode Fayemi, says the forum has opposed open grazing and supported the establishment of ranches across the country.

Fayemi made this known in a communique released after a meeting of the forum on Wednesday which discussed herdsmen issues affecting their states.

He said the governors also agreed to implement the National Livestock Transformation Plan (NLTP) to address the farmers-herders crisis in the country.

According to Fayemi, the country must embrace modern systems of animal husbandry that would replace open, night, and underage grazing.

He noted that the governors also strongly condemn criminality and the ethnic profiling of crime in the country in an effort to frame the widespread banditry.

The communique reads: “Following an update from governors on the various initiatives taken by state governments to address the rising insecurity in the country due to the activities of herdsmen, members reached a consensus on the need for the country to transition into modern systems of animal husbandry that will replace open, night and underage grazing in the country.

“State governments are encouraged to put in place systems to accelerate the grazing initiative of the National Livestock Transformation Plan and ranching in the country.

“The Forum respects the right of abode of all Nigerians, and strongly condemns criminality and the ethnic profiling of crime in the country in an effort to frame the widespread banditry and the herders-farmers crisis.”

Fayemi added that the forum will inaugurate an advisory committee to guide the governors on the procurement of COVID-19 vaccines.

He noted that the forum is also engaging directly with the National Primary Health Care Development Agency (NPHCDA) to ensure that vaccines are administered very well.

It read: “The Forum is also engaging directly with the National Primary Health Care Development Agency (NPHCDA) to ensure that vaccines are administered equitably, first to workers who are on the frontlines of the pandemic.

“The Forum deliberated on the underutilisation of fiscal facilities in the country, including the Universal Basic Education (UBE) Fund, the Basic Health Care Provision Fund (BHCPF), and the Saving One Million Lives programme for results (SOML), which are meant to expand the size and scope of resources spent on health and education across all states of the federation.”