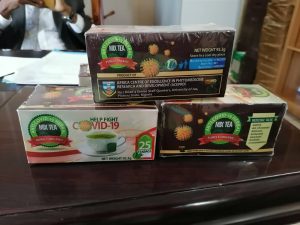 The Senate of the University of Jos (UNIJOS) has approved the use of a special COVID-19 herbal tea said to be effective in combating coronavirus.

The Senate of the university gave approval for the use of the drug during its fourth special meeting for the 2019/2020 academic session.

The memo containing the approval was contained in a memo dated 11th January 2021, signed by the Registrar of the University, Monday M. Danjem and seen by our correspondent.

The Senate in the memo, urged all staff in the University community to patronize the tea which was produced by by the UNIJOS Africa Centre of Excellence in Phytomedicine Research and Development.

“Senate was informed that the University of Jos Centre for Excellence in Phytomedicine has produced a home-made herbal tea for the prevention of COVID-19, and it is sold at an affordable price.”

“Senate directed that the information should be disseminated to all staff in the University Community for patronage of the herbal tea,” the memo reads in part. 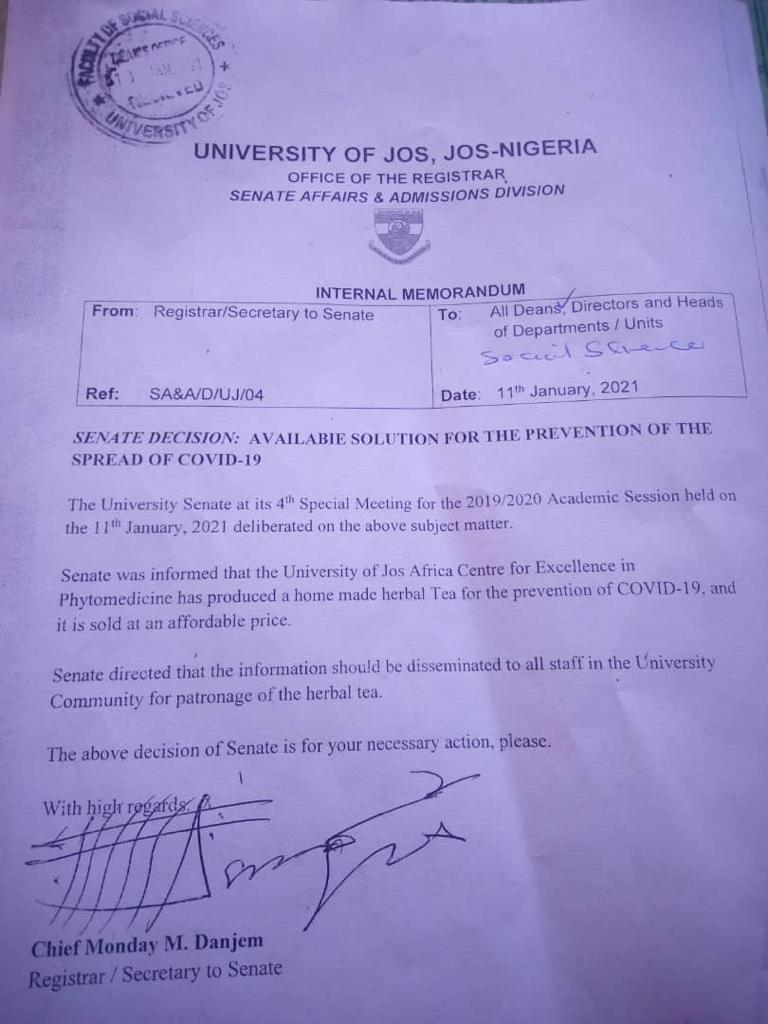 However, TheCable, reports that the National Agency for Food and Drug Administration and Control (NAFDAC) is yet to approve the drug for use.

The Director-General of NAFDAC, Professor Mojisola Adeyeye was quoted as saying on Friday that she was not aware of any such approval and would have to check with the relevant directorate at the agency.

However, Simeon Omale, a pharmacologist who is one of the lead researchers, confirmed that the centre already has a pre-conditional approval, but not a final approval from NAFDAC.

Omale said; “We have done the safety profile (and) it is very safe.”

“Using the fruit flies being used for drug discovery in the modern world, we tested for the anti-inflammatory that we reported there, and we have also checked it for anti-malaria. So, those basic experiments have been done.”

He argued that herbal medicine is not like orthodox drugs that are usually subjected to various stages of clinical trials, adding that the urgent nature of the covid-19 pandemic and the assurance of researches conducted so far made them certify the tea for human use.

“If you have gotten some evidence, there is an accelerated kind of approval.”

“Herbal medicine is not like the normal orthodox drugs that you go through various stages of clinical trials. For herbal medicine, as long as people are taking it and it is safe, NAFDAC will just do a little profile to check how safe it is and they give you number.”

“We have done the research that NAFDAC needs to ascertain the safety of the product; that is the document we are going to present to them on Monday,” he explained.

Meanwhile, the National Agency for Food and Drug Administration and Control (NAFDAC) has warned Nigerians against taking fake vaccines that are being circulated in the country.

Speaking during a virtual media briefing on Friday, NAFDAC Boss, Prof Mojisola Adeyeye, said the agency has not approved any COVID-19 vaccine in the country.

She advised the public not to take any COVID vaccine as they can cause COVID-19-like illnesses and can lead to death.

Adeyeye also warned government establishments, agencies, and big corporations against ordering COVID vaccines without confirming from NAFDAC if the vaccine has been approved.

In a related development, Nigeria set a new COVID-19 record on Friday 15th January, posting its highest infections of almost 2,000 new cases in a single day.

Figures from the Nigerian Centre for Disease Control (NCDC) on Friday, January 15, 2021, showed that the nation reported 1,867 new cases.

The new figure is the country’s highest number of new positive samples confirmed within a 24-hour period.