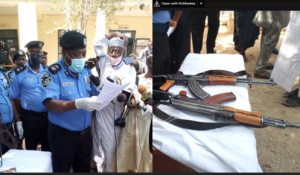 The Kastina State Police command has killed three bandits during a shoot-out in the Danmusa Local Government Area of the state.

The bandits were killed on Tuesday night following an attack on Unguwar Bera and Tashar Manoro villages by over 50 bandits.

It was gathered that police operative waited in ambush for the bandits between Mara and Tashar Gajere villages, where they killed the bandits

The incident was confirmed by the Commissioner of Police in the state, Sanusi Buba.

Buba while speaking on the incident noted that the attack happened 11.21 pm and two new AK-47 rifles with 15 rounds of 7.62mm live ammunition were recovered from the bandits.

Buba said, “Search parties are still combing the environs with a view to arresting injured bandits and/or recovering dead bodies and their operational weapons.”

“I thank the Inspector General of Police for his support. He is passionate about peace in Katsina. I also thank Governor Aminu Masari as well as officers and men in the command. I assure you all, we in the command are very committed to rid the state of crimes.”

Naija News recalls that Sunday Igboho had claimed the Ooni disappointed the Yoruba people when he visited President Muhammadu Buhari over the herdsmen crisis.