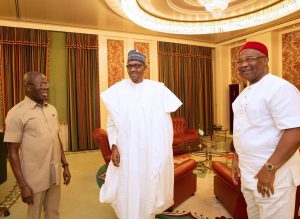 The Governor of Imo State, Hope Uzodinma, on Wednesday said the ruling All Progressives Congress will remain strong when President Muhammadu Buhari ends his tenure in 2023.

The progressives governor stated this while speaking on Channels Television’s Politics Today programme.

The Imo State Governor in his statement said the registration process is a step in the right path for the party.

Uzodinma said the ongoing exercise was a step in the right direction for the ruling party.

Governor Uzodinma when asked whether the end of Buhari’s tenure would affect the party, said the APC would rather emerge stronger.

“So, I don’t agree that after 2023 when President Muhammadu Buhari will no longer be the President of Nigeria, that the APC will be weak, no, APC will be strong and I can assure you that I have seen a new excitement, newly committed among members and increasing support even among non-members of the APC who are now joining in their thousands to become members of the party. The APC is the party to be any day, anytime.”