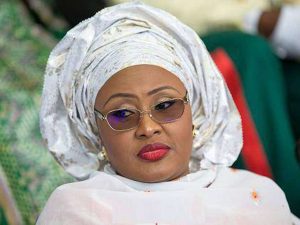 The death has been announced of Mr Mohammed Yusuf Ovajimo, a photographer in the office of the First Lady, Aisha Buhari.

Ovajimo’s death was confirmed by the Director of Information in the Office of the First Lady, Suleiman Haruna via a post on his Facebook page.

“Today we lost Mohammed Yusuf Ovajimo a professional photographer of the First Lady of Nigeria. “He is an accomplished professional with loads of skill and great human relations. He will be greatly missed. May his soul rest in perfect peace”, he said in the post without revealing further information on the circumstances that led to the death.

Naija News recalls that Sunday Igboho had claimed the Ooni disappointed the Yoruba people when he visited President Muhammadu Buhari over the herdsmen crisis.

He had described the Ooni of Ife, Governor Seyi Makinde of Oyo, and the national leader of the APC, Bola Tinubu, as Fulani slaves.

“When Ooni visited Buhari, the president received him by standing up but he said something I don’t like. That is why the Alaafin called me. He wants to tackle what Ooni said.”

“I need buses to transport people. The three vans we use are bought by me. We lost three buses that were hired on our way to Oyo. Ooni should be able to tell Buhari about what Yoruba want. But he has collected dollars from Buhari. He called me but I don’t want to see him. Only Alaafin is supporting us and he has written a letter to the president. Ooni disappointed me. Politicians are with him,” Igboho had said.

But reacting in a post on Twitter on Wednesday, Fani-Kayode said, “I just spoke with Sunday Igboho and he confirmed to me that what he said about our revered Ooni of Ife was said in the heat of the moment.

“He expressed his regrets and I was relieved to hear that. To err is human and to forgive is divine. I appeal to Kabiyesi to forgive him.

“For the record, let me state clearly and categorically that no Ooni of Ife, whether living or dead, has ever been a slave of the Fulani and neither will they ever be.”