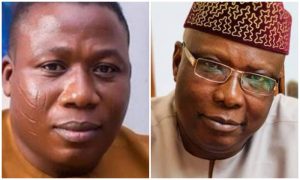 Ojudu in a post which has now been deleted on Facebook alleged that Igboho was contracted by the opposition party to disrupt the 2009 Rerun Governorship Election in Ekiti State.

The Presidential aide further stated that he and the National leader of the All Progressives Congress, Bola Tinubu, met with Igboho to halt the plan.

Igboho while speaking with newsmen at his residence on Tuesday shortly after one of his buildings in Soka area of Oyo State was set on fire, said he does not know Ojudu, described the words of the president’s aide all lies.

He said, “I have been hearing reports about a man called Femi Ojudu. I don’t know this man. He said the late Chief (Lamidi) Adedibu contracted me in 2009 and we all know that Adedibu died in 2008. I think the man should undergo a mental test because the late Chief Adedibu did not train me for any job and I was not close to the late Adedibu.”

“I have a relationship with my father, Senator Rasheed Ladoja, and I have never betrayed him in the years I was his follower.”

“I don’t know Femi Ojodu and I didn’t have any business with him. All that he said are lies.”

He added that no political officer holder directed him to issue a vacation order to the Fulani herdsmen accused of perpetrating crimes ranging from kidnappings, killings, rape to in Igangan, Ibarapa Local Government Area of Oyo State.

Igboho lamented that politicians have started politicising his intervention.

The activist said, “Politicians are now politicising the herdsmen issue to tarnish my image so as to weaken me.”

“Any politician who knows he paid me money to do all that I am doing should come out openly before the whole world. I was not bankrolled by anyone. My paramount concern is for peace to reign in the land of my forefathers.”

Igboho further said it was disappointing that some Yoruba indigenes have started supporting Fulani herdsmen to launch attacks against him but said: “until all Fulani herdsmen vacate the lands of our ancestors, that is when we won’t have issues”.

“The Fulani herdsmen have been killing, kidnapping and raping the people (of Igangan) but no government came to their rescue until my intervention. I owe the people a duty because I hail from the town, I even have the tribal mark of the people,” he added.