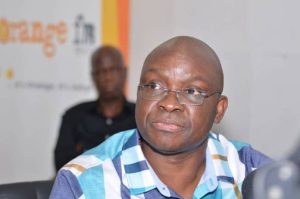 Former Ekiti State Governor Ayo Fayose has described the sack of Service Chiefs as a “step in the right direction.”

Naija News had reported that President Muhammadu Buhari sacked the service chiefs in the country and has immediately appointed their replacements.

According to a statement on Tuesday by the Special Adviser On Media and Publicity to the President, Femi Adesina, the new service chiefs will now pilot the security affairs of the country.

In a series of tweets via his Twitter handle on Tuesday, Fayose said the sack of the service chiefs is another victory for Nigerians.

The Peoples Democratic Party (PDP) chieftain, however, called for a probe of the former Service Chiefs, accusing them of bribery and corruption.

Fayose wrote: “Though coming after persistent pressure from Nigerians, President Buhari’s removal of the Service Chiefs and their replacement is a right step in the right direction. It is yet another victory for the people of Nigeria.

“The sacked Service Chiefs only served themselves and their pockets and can at best be described as “Disservice Chiefs” under whom Nigeria became completely insecure.

“It is my call to the ICC and other relevant authorities that tenure of the “sacked” Service Chiefs should be investigated, most importantly human rights abuses and extrajudicial killings under their watch and commands.”