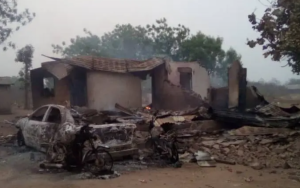 The Sarkin Fulani of Oyo, Alhaji Salihu Kadiri, has condemned the attack on Fulani communities in Ibarapa North of Oyo state by a renowned freedom fighter, Sunday Igboho.

Naija News had reported that Igboho had issued a seven-day ultimatum to Fulani herders to leave Ibarapa area or face the consequence.

Speaking on a radio programme in Ibadan, last week Tuesday, Igboho said that the reason for asking the herders to leave was due to the unending killings and kidnapping of Oyo indigenes.

However, it was gathered that Igboho on Friday stormed the area with hundreds of his supporters to make good his threat.

Speaking to Daily Trust on Friday, the Sarkin Fulani said Igboho and his supporters drove his family out of their homes, and their properties, including 11 vehicles, were set ablaze.

Kadiri added that Igboho and his men attacked a fulani settlement with a nomadic primary school, a borehole and a milk collection centre

He said: “As I am talking to you, I am hiding somewhere in the bush.

”We fled and ran away for our lives when we learned they are coming, but they attack the communities and burnt our houses, my cars and that of my children, they also shoot an old woman to death which I learned she may be my first wife.

”As of now I cannot give you the details of the people we lost to this attack, as we are also hidden in the bush.”

Meanwhile, Governor Seyi Makinde of Oyo State said his government will not allow anyone to cause an ethnic crisis in the Southwest state.

The governor also condemned the attack on Fulani herdsmen in Igangan area of the state by supporters of a renowned freedom fighter, Chief Sunday Adeyemo, popularly known as Igboho.

According to Makinde, nobody has the right to attack or harass anyone carrying out legitimate businesses in the state.

He added that his administration would not allow anyone to threaten the peace of the state by acting unlawfully or infringing on the rights of others.

He, however, urged the police to arrest miscreants, irrespective of their tribes, causing tension and threatening the peace of the state.