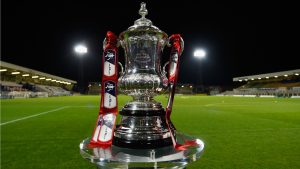 Manchester City will be away at Everton that defeat Jose Mourinho side, Tottenham Hotspur on Wednesday.

Bournemouth will Southampton which defeated Wolves on Thursday evening.

Leicester City will host Manchester United, while Sheffield United will face the winner of Barnsley/Chelsea.

See the fixtures below:

Barnsley or Chelsea vs Sheffield United