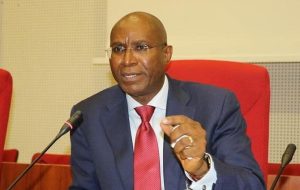 The Deputy Senate President, Ovie Omo-Agege, on Thursday was absent at the meeting convened by the Governor Abubakar Bello-led All Progressives Congress Membership Registration/Revalidation Committee to resolve the difference between political leaders in the Delta State chapter of the party.

The meeting which was held at the National secretariat of the party in Abuja had in attendance, Minister of State for Labour and Employment, Festus Keyamo, a former APC governorship candidate, Great Ogboru and Olorogun O’Tega Omerhor.

Abubakar while speaking with a journalist after that meeting said, “It is not unusual in a political process to have differences in opinions and what have you. So, Delta State is a very important state for us in the South-South and we have been able to agree on a workable method to move the party forward.”

The chairman also expressed delight that the exercise was going on smoothly in most states of the federation.

Bello said, “Overall, the registration is going on well. I was in Ogun, I have been receiving reports from other zones and the major complaint is that the number of materials which is about 100 per unit is too small.”

“But I have made complaints to the National Headquarters and more materials will be provided for those local governments or units that need more materials. So, basically, nobody will be left behind.”

Governor Abubakar further stated that the exercise would be held for two weeks, however, an additional time could be added to continue the process.

Keyamo, while responding to a question on a letter he wrote complaining about certain infractions, said, “That is why we are here; it was that letter that ignited this meeting and all we fight for is equity for all, not advantage to even me at all.”

“All we are fighting for is equity, justice for all, not an advantage to anybody, not even me as a minister and that is why we came here in the first place. It was my complaint that ignited this process and then we are all brothers, we are all united.”

Earlier, the Delta State APC Publicity Secretary, Sylvester Imonina, announced the suspension of the exercise as a result of the crisis.

He said, “The National Caretaker Committee of the party has deemed it necessary to suspend all registration and revalidation exercise in the state, citing seeming disagreement amongst leaders of the party in the state.”