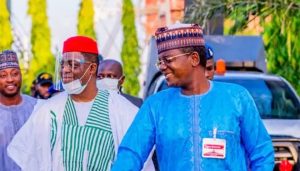 In a post on his Twitter handle on Friday, the Peoples Democratic Party (PDP) described the Zamfara governor as a patriot he can vouch for.

Fani-Kayode wrote: “The allegation that Bello Matawalle supplied Hilux buses & logistics to the bandits that are killing his people in Zamfara state is absurd.

“I know this man well & can vouch for him any day.

“He is a patriot & has fought the terrorists more than ANY other Governor in the country.”

It will be recalled Sahara Reporters had in one of its publications, alleged the Zamfara State Governor has shared about fifteen brand new Hilux vehicles to leaders of different repentant bandits in the state.

It added that he also shared millions of naira to the repentant bandits as compensation.

A top military officer quoted in the report also noted that some bandits now carry out attacks with some of the vehicles given to them by the Zamfara Governor.

But the Zamfara State government rejected claims that Matawalle donated vehicles and huge cash to repentant bandits in the state.

The government in a statement signed by the Special Adviser to the Governor on Media and Communications, Zailani Bappa described the allegation as false and misleading.

The Zamfara state government has labelled the report as wicked and malicious.

It added that the story is capable of damaging the relative peace being enjoyed in Zamfara State.

Explaining the government side of the story, Bappa said the news platform failed to balance its story in failing to reach out to the government before publishing.