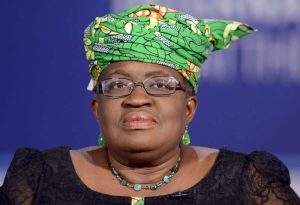 President Muhammadu Buhari on Saturday welcomed United States of America’s acceptance of Ngozi Okonjo-Iweala as the Director-General of the World Trade Organisation.

Buhari in a statement released on Saturday through his Senior Special Assistant on Media and Publicity, Garba Shehu said Nigeria and Africa are happy about the decision of the United States.

He further stated that this shows the turnaround in the relation between the continent and the US under Joe Biden’s administration.

Buhari stated this in a statement released through Shehu, titled, ‘President Buhari welcomes US acceptance of Okonjo-Iweala’s imminent WTO leadership’.

Shehu quoted Buhari as saying, “We certainly welcome the decision of the new US administration to remove the last obstacle in the path of Dr Okonjo-Iweala to becoming the first female and the first person of African descent to lead the organisation.”

“Nigeria and the entire African continent are happy about this new US position, which signifies a shift and an important turnaround in the relations between our continent and the United States under the Biden administration.”

“Today, we see that the United States stands with Nigeria and Africa with the acceptance of our widely respected citizen, Okonjo-Iweala to lead the WTO. We look forward to working very closely with the new U.S administration on this and all issues of common interests, especially in such areas as accelerated economic growth, fight against terrorism and deepening progress on development issues.”

The development has seen Nigeria candidate who has the support of other African countries, Ngozi Okonjo-Iweala the sole candidate left in the race.