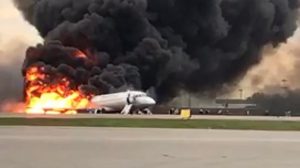 The Accident Investigation Bureau (AIB) has said it cannot investigate Sunday’s military plane crash in Abuja because it does not investigate military incidents or accidents except when invited.

General Manager, Public Affairs, AIB, Mr Tunji Oketunbi, made this known in a message sent to The Punch.

He stated this in reaction to the crash of a jet operated by the Nigerian Air Force in Abuja earlier today.

It was gathered that six passengers aboard the military aircraft, King Air 350, were killed in the accident.

Reacting, the AIB which is the investigating commission in charge of all aviation-related accidents and incidents in Nigeria, said it does not investigate military accidents except when invited.

“There was an accident involving a military aircraft. By the power established AIB-N, we do not investigate military incidents or accident except where invited. Please direct all your enquiries to the appropriate authorities,” Oketunbi said.

Meanwhile, a source at the control tower has disclosed how the pilot of the Nigerian Air Force Intelligence Reconnaissance Aircraft on Sunday complained of engine failure barely moments after takeoff.

The source disclosed the information to the Punch on the condition of anonymity.

The official said there been regular flights from Abuja to Minna since the abduction of the Kangara students last week.

The source said, “The aircraft was on its way to Minna. Moments after, on getting to Bassa Local Government Area, he informed the control tower that he had experienced an engine failure.”

“He was advised to return to the Abuja airport immediately but it crash-landed.”