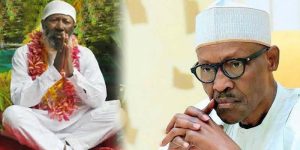 The Founder of One Love Family, Satguru Maharaj Ji has called on government officials to swear their oath of office with gods to put an end to corruption in Nigeria.

The popular clergyman made the call while speaking at a news conference on Saturday, NAN reports.

According to Maharaj Ji, Ogun, Ifa, Sango and other traditional gods should be considered in oath swearing in courts and inaugural ceremonies.

“People swear with the Bible and Quran and get away unpunished for mismanagement of human and material resources, fraud and scandals.

“This has led to the destruction of many families and industries. When we swear with the gods, hardly will you see people embezzle money,’’ he said.

Maharaj ji said people who are entrusted with public positions will perform well if they are made to swear by indigenous gods.

“This traditional process will make our leaders to be on their guard because the gods are swift in executing punishment for crime and injustice, working with equity and justice”, Maharaj ji added.

It was gathered that Sowho, popularly called Daddy K, was shot dead around 6 p.m. on Saturday evening, near a popular hotel along Akintola road close to the Adeniyi end of the town.

The deceased had gone to check a building in the vicinity when the assailants surfaced from nowhere and opened fire on him, before speeding away, a source told Vanguard.

Sowho, 40, was taken to a private hospital in the area where the doctors confirmed him dead on arrival (DOA) before his remains was deposited in the mortuary.