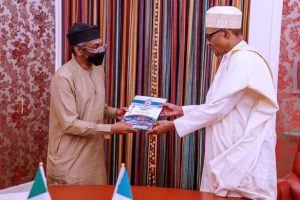 The Speaker of the House of Representatives, Femi Gbajabiamila, has revealed why President Muhammadu Buhari delayed change of Service Chiefs.

Speaking to State House correspondents after a closed-door meeting with President Buhari on Wednesday, he said the National Assembly was in support of Buhari’s decision to rejig the country’s security architecture.

Gbajabiamila explained that Buhari delayed replacing the former security chiefs because he was “studying the situation”.

He however assured that lawmakers will assist the new military heads to operate efficiently.

“The appointment of new Service Chiefs is what everybody has been clamouring for – the House, the Senate and the public,” Gbajabiamila said.

“The president took his time, he studied the situation very well and did it at the right time that he thought he should do it. We are in support of what he has done.

“Everything that is needed, we are all in this today. The National Assembly will not in any way put hurdles before the Service Chiefs.”