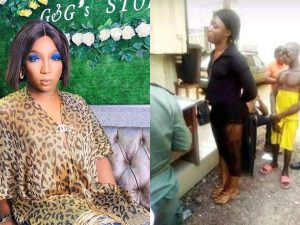 A Cameroon court has sentenced two of its citizens to prison for allegedly involved in homosexuality.

Naija News understands that a renowned crossdresser, Shakiro was as well sentenced to prison for the act which is considered a crime in Cameroon.

According to Cameroon News Agency, the individuals were declared guilty of the offence on Tuesday, February 9 by the court located in Ndokotti Douala. The suspected homosexuals were sent to the New Bell Central Prison in Douala.

Naija News understands that Shakiro had been arrested and released several times by the country’s authority.

Watch a video clip of the sentencing below.


Meanwhile, one out of twelve crime suspects paraded by the Enugu State Command of the Nigeria Police Force, Chukwuebuka Udeh, has revealed what made him raped a 5-year-old girl in the state, Naija News reports.