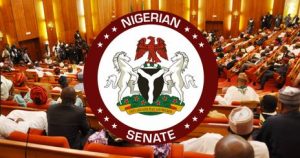 The Senate on Tuesday called for an investigation into the petition written against the Chairman of the Federal Character Commission (FCC), Mrs Muheeba Dankaka, over allegations of abuse of office.

The Federal Character and Inter-governmental Affairs on Tuesday acted on the directives of the Senate to investigate the allegation against Dankaka who was appointed in April 2020 by President Muhammadu Buhari.

Dankaka was accused by some Commissioners of the Federal Character Commission of abuse of office.
The Chairman of the committee set up to investigate the allegation, Senator Danjuma La’ah, on Tuesday called on the FCC Chairman to defend the allegations raised against her by the Commissioners.

The Commission Chairman, however, told the lawmakers that she was not prepared for investigative hearing as the letter of invitation was delivered to her yesterday morning.

Her words: “I got the invitation letter this morning and I am not supposed to be the only one in this place.”

She further said, ”As far I am concerned, we have 37 Commissioners in the Commission, I have over 30 of the Commissioners with me, but about five of them because of their selfish interest decided to go from one place to another”.

The Chairman of the Committee called for a closed-door session due to tension that was rising and the meeting lasted for one hour.

The Chairman of the Committee while speaking with newsmen after the meeting on Tuesday said the investigation into the matter was ongoing assuring that the Committee will get to the root of the matter.

According to him, the Commissioners who petitioned the Committee are expected to appear before the lawmakers by next week Wednesday.

The Petition written against the Chairman read in part: “Misrepresentation and Misapplication of section 2(1) of the Establishment Act as well as an unwholesome arrogation of power to self by the Chairman thereby alienating the Commissioners, plenary, and Commission from the activities and operation/ administration of the commission.”

“Secret holding of official interactive sessions and official meetings with heads of Ministries, Departments and Agencies (MDAs) privately without the involvement of relevant operational committee, issuance of waivers and certificate of compliance without the knowledge and approval of plenary as provided by the Establishment Act.

“Restriction of Commissioners’ access to MDAs files, even where they managed to have access, vital documents are surreptitiously removed and file numbering tampered.

“Failure to render an account of financial transactions of the Commission to the plenary. No report of the income and expenditure to the plenary session provided by extant rules.