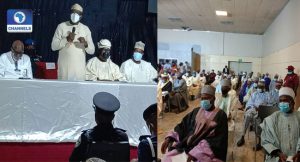 The meeting between members of the Nigeria Governors Forum and members of the Miyetti Allah Cattle Breeders Association of Nigeria has started in Akure, the Ondo State capital.

Some of the governors in attendance include Ondo, Osun, Ekiti, Oyo, and Jigawa, and Kebbi states.

The Chairman of the Nigeria Governors’ Forum and Ekiti State Governor, Kayode Fayemi, in his open address said the meeting was called to address the issue of insecurity in the South-West.

He further stated that the vacation order issued against the Fulani herdsmen in Ondo State was misinterpreted by the media.

Fayemi further stated that Akeredolu did not order the Fulani to leave Ondo State.

Fayemi said, “Many members of MACBAN were born in the South-West. So, Akeredolu cannot ask Fulani to vacate Ondo State. The area concerned is the forest reserves and it is about registration and also to work in line with the law.”

“What we are after is the criminals, not Fulani herdsmen, criminals are criminals irrespective of their ethnic group.”