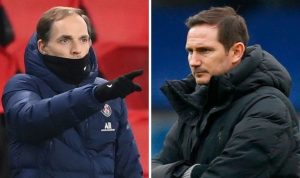 Recall that Tuchel was sacked a few months ago after taking PSG to the Champions League final which was won by Bayern Munich.

Tuchel during his time at PSG won back-to-back league titles with the club, but the trophies were not enough for the club owners, who replaced him with Mauricio Pochettino.

The West London side has lost five of their past eight Premier League matches after a good start to the season.

This is coming a few hours after Chelsea defeated Luton through Tammy Abraham’s hat-trick in the FA Cup fourth round on Sunday.

In a statement on Monday, Chelsea thanked Lampard for what he has achieved in his time as Head Coach of the Club and wished him good luck in his managerial career.

Meanwhile, Tuchel has been considered as a replacement for Chelsea legend, Frank Lampard.

Tuchel made his name at Dortmund, ushering in a brand of fast-paced, high-press football that made the Germans one of the finest sides to watch in Europe.

His two years at the club yielded just one trophy but he left with a win percentage of 62% and it was enough to earn him the main job at Paris Saint-Germain.

Tuchel won six trophies in two years in the French capital, though it was his failure to win the Champions League that will leave a sour taste as the Ligue 1 giants lost to Bayern Munich in last year’s final.

The German’s win percentage in France was 74.8%.