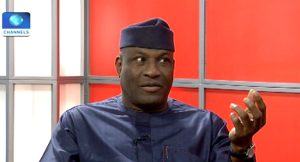 Governor Seyi Makinde’s special adviser on security matter, Fatai Owoseni, has called on the people of Oyo State and Nigerians generally not to make reckless comments capable of causing war following the tension in Igangan, Ibarapa Local Government Area of the state.

Owoseni stated this while speaking during an interview on Channels TV on Monday.

He further stated that the tension in the community may be escalated due to statements of people and public groups.

“We must restore confidence in our people and not for people to make reckless comments. Both ways, people are saying Sunday Igboho has said things which ought not to have been said. And we have some people who are being paid with public funds also responding on behalf of a socio-cultural group. Is that reasonable? Is that responsible at all?”

He added that people must be “responsible in their comments and not just fanning the embers of disunity.”

He also spoke concerning the success of police authorities who he revealed has made some arrests following reports of kidnapping in Igangan noting that ransoms were also recovered.

“I will start with the case of kidnapping that led to the death of that young man who went with a friend to the farm.”