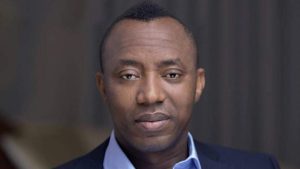 Former Presidential candidate, Omoyele Sowore, has called on the people of Uganda to make sure that President Yoweri Museveni doesn’t enjoy ‘the fruit of a stolen mandate’.

Naija News had earlier reported that the Uganda Election Commission, on Saturday declared Museveni the winner of presidential election.

The commission’s chairman, Justice Simon Mugenyi Byabakama, noted that the Uganda President won his sixth term in office with 58.6 per cent of the votes while main opposition candidate, Bobi Wine, got 34.83 per cent.

Museveni has ruled over Uganda since seizing power from Idi Amin in 1986.

Human rights activist, Sowore while speaking with Worship Media on Saturday said the presidential election should be a lesson to Africans that electoral politics is not enough to deal with dictators.

He added that there should be a different level of engagement that combines election with physical actions.

The SaharaReporters Publisher called on the people of Uganda to go into the revolutionary mode as the ballot has failed them.

He said, “There is nothing strange about what happened in Uganda. I was in touch with Bobi Wine until the day of the election. We knew that when they suspended the Internet, that was the last phase of the rigging process. Without social media, Bobi Wine’s digital followers would have no chance to publish results from polling units across the country.”

“This should teach us a lesson that electoral politics is not enough to deal with dictators; there has to be a different level of engagement that combines election with physical actions. I must say that Bobi Wine has taken the first step and his movement in Uganda did a fantastic job marching toe to toe with a dictator, Museveni, but this is not just enough.”

“Ugandans should completely go into revolutionary mode at this point. The ballot has failed them. They must hit the street and ensure this guy (Museveni) doesn’t enjoy the fruit of a stolen mandate. If someone successfully robs a bank, the society should not look back and say because he wasn’t caught at the bank, they should let him spend his loot.”

“We must go after him in every way we know, recover the loot and make him pay for his actions. It’s the same way Ugandans should act. I think the level of social consciousness In Uganda is high enough to take this guy out of their political life.”

“We would sound apologetic if we say they should wait for another four years. I can’t imagine myself living under the Buhari junta for another two and a half years. I am overwhelmed already. Many Nigerians are already overwhelmed. So, can you imagine Ugandans going another five years under Museveni?”

“Bobi Wine would have gone on exile, and nobody will remember him in the next five years. If they can stand up to this dictator now and take back from the dictator their stolen mandate and organize fresh elections, probably change the constitution, that would be the real democracy.”