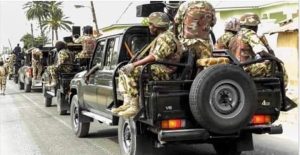 Troops of the Nigerian military deployed in the Operation Thunder Strike have killed several armed bandits in Chikwale forest on the Kaduna-Abuja expressway.

The Coordinator, Defence Media Operations, Major General John Enenche who confirmed this in a statement on Sunday, noted that the operation took place on Saturday, 23rd January.

Based on credible intelligence reports, the troops with Nigerian Air Force (NAF) fighter jets and helicopter gunship launched several coordinated attacks against the bandits, killing scores of them while others escaped with wounds.

Enenche in the statement noted that the troops have continued surveillance of the area and won’t rest until all bandits and other criminals are evicted and normalcy is restored in every troubled zone across the country.

“The operation was executed yesterday, 23 January 2021, sequel to credible intelligence reports indicating the significant presence of armed bandits in the area, which is about 20Km West of the Kaduna-Abuja Highway.”

“The attack aircraft, therefore, took turns in engaging the bandits, who were seen firing at the attack helicopter as it strafed them.”

“Several armed bandits were accordingly neutralized in the air strikes, while some escaped with various degrees of injuries. Meanwhile, aerial surveillance missions have been intensified, in coordination with ground troops, to locate the fleeing bandits.”

“The Armed Forces of Nigeria and other security agencies will sustain the offensive against the enemies of our Nation. We shall not relent until normalcy is restored to all troubled zones of the Country.”

In another development, Yoruba activist, Sunday Adeyemo, popularly known as Sunday Igboho, has revealed why bullets fired at him at the house of the Seriki of Fulani is Ibarapa, Oyo State, and did not harm him.

Igboho in his statement called on Fulani herdsmen killing and kidnapping people in the South-West to vacate the region.

The Oodua Republic agitator during an interview with popular broadcaster, Kola Olootu, noted that the bullets did not harm him because of the efficacy of Yoruba traditional power.