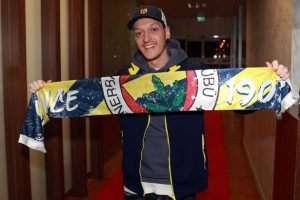 German International Mesut Ozil has completed a transfer to Fenerbahce after eight years at Arsenal.

The 32-year-old star has put pen to paper on a deal in Turkey, after turning down an approach from MLS outfit DC United.

World Cup winner Ozil was frozen out at Arsenal this season, with Mikel Arteta excluding him from his Premier League and Europa League squads.

Ozil vowed to see out his £350,000-a-week contract, which expires at the end of the season, but with no plans for Arteta to reinstate him to the first team for the second half of the campaign, the German has decided to quit the Emirates.

Arsenal and Ozil recently came to an agreement to terminate the German’s contract.

This has seen the midfielder leave £7million – which he would have earned between now and the end of the season – on the table.

But it has also allowed him to end his Arsenal nightmare early.

Ozil said: “I’d like to thank the club for this amazing journey over the past seven-and-a-half years.

“The support I have felt from the team and fans during my time here has been truly incredible and something I will always be grateful for.

“Together we won trophies for the first time in years and created memories that will last a lifetime. The Arsenal fans will forever remain in my heart.

“I’d like to thank Edu Gaspar for helping bring about a professional and dignified solution in the past few days, and I wish everyone at the club the best in their attempt to continue to bring Arsenal back to the top, where we belong.”

Ozil will wear the number 67 at Fenerbahce, which is the postal code for Zonguldak in Turkey; the 31-year-old’s home town.

From next season onwards he will sport his trademark number 10.

Ozil joined Arsene Wenger’s Arsenal from Real Madrid back in 2013.