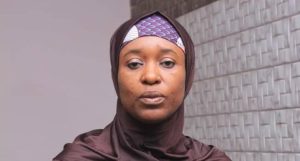 The co-convener of the #BringBackOurGirls Movement further stated that there are serious matters that require the time and resources of the judiciary than against the fundamental rights of Nigerians.

Yesufu stated this while speaking with SaharaReporters on Thursday regarding an Abuja High Court ruling in her favour and 49 others who supported #EndSARS protests across the country last year.

Recall that Justice Bello Kawu in his ruling on Wednesday directed the magistrates’ court to stop the suit filed against 50 people for supporting the #EndSARS protests.

Okeke who filed the suit against them had alleged that the promoters of #EndSARS protests should be held for the damage of properties during the protest.

“An order of this honourable court, that on the granting leave to the application to issue and serve on the defendant an application for judicial review against the proceedings/direct criminal complaint of Hon. Omolola Tolulope Akindele sitting at the Magistrate Court II, Wuse Zone 6 in the suit of Kenechukwu Okeke vs Deji Adeyanju and 49 others in suit no: CR/49/2020.”

“An order of this honourable court, that on the grant of the above orders herein, serve as a stay of all proceedings on the direct criminal complaint Omotola Tolulope Akindele sitting as Chief Magistrate Court II, Wuse Zone 6 in the suit of Kenechukwu Okeke vs Deji Adeyanju and 49 others in suit no: CR/49/2020,” the ruling read in part.

Yesufu while reacting to the ruling said, “Honestly, I have not really followed that case, because the case in itself is all shades of filthiness. In the first place, why are they filing a case against us? For what? For exercising our fundamental human rights to protest against people being killed? Or, because we are coming out to say we deserve the right to live in their own country? I think what really needs to happen is for our judiciary to assess itself such that it really becomes that last hope of the common man.”

“Apart from that, the judiciary should not be a place where baseless accusations should thrive. It should not be a place where the resources and time of the judicial system are wasted on shallow allegations. This case against us shouldn’t have been filed in the first place. The time used in sitting for this case should have been used for more important things that would better the lives of the people.”

“The judiciary itself needs a whole lot of reform. A lot of things are coming up, be it politics or other things just to waste the time of the people. Judiciary is the third arm of government and whatever they do sets a precedent. We need a lot of things that the judiciary should face in terms of the governance of this country. And it should stop itself from being allowed to be ridiculed.”

In response to her usual audacity to speak against the excessiveness and highhandedness of the government without getting intimidated, she said her conviction about what believes to be the truth has been her motivation.

“I think it boils down to value, and it is based on conviction. The youth should not do things based on what people say, whether right or wrong. Just hold on to your conviction. I will always say to people, I’m not on anybody’s side. I’m not even on my side. I’m always on the side of truth, and where the truth is, that is where I will be irrespective of whose ox is gored.”

“I think we have a situation where people want to look good; they are looking for validation or popularity. When trying to look for this, you lose the essence of who you are. Hold yourself to a higher standard. I just keep saying it the way it is. And if it’s true, sooner or later, people will come and align with you. You find out that people who abuse and hate you for standing for truth will later be the ones that will support you when you don’t relent in standing for the truth.”

“What people say about you, either good or bad, is not your reality. Your reality is when you are sitting down alone, what you think about yourself; that’s your reality. We must always welcome dissenting opinions. The dissenting opinions help us sometimes to appraise ourselves. If people praise me and I don’t have an issue with that, why should I have an issue with it when the same people criticise me? It’s an avenue to look at an issue from another perspective.”