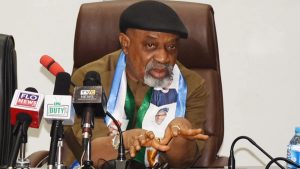 The Minister of Labour and Employment, Chris Ngige, on Friday, noted that the meeting with the Senior Staff Association of Nigerian Universities and the Non- Academic Staff Union of Universities and Allied Institutions yielded results.

The former Governor of Anambra stated that agreements were reached by both parties with timelines, which were documented as Memorandum of Understanding.

He further stated that the MoU was presented to the leaders of the two unions to consult their members with a view to calling off the strike, latest by Monday.

“The meeting did not end in deadlock. Rather, agreements were reached on some issues with timelines and these were documented as Memorandum of Understanding and given to leaders of the two unions to go and consult their people with a view to calling off the strike, latest by Monday, February 15, 2021.”

According to a statement on Friday, by the Deputy Director and Head of Press, Federal Ministry of Labour and Employment, Mr Charles Akpan, titled, ‘Meeting with SSANU, NASU did not end in deadlock-FG,’ the minister said: “five issues discussed had agreements, while only one had a proposal, which was a government proposal for the unions to go back and discuss with their organs.”

Naija News had earlier reported that the federal government of Nigeria has threatened to implement the no work, no pay policy for the striking non-academic workers of public universities.

The Minister of Labour, Chris Ngige handed down the warning on Thursday during a meeting with the union representatives as he noted that Section 43 of the Trade Dispute Act 2004 and the International Labour Organisation (ILO) statutes permit the government to stop the salaries of workers when they are on strike.

It will be recalled the non-teaching staff of public universities in the country comprising the Senior Staff Association of Nigerian Universities (SSANU) and the Non-Academic Staff Union of Universities and Allied Institutions (NASU) had embarked on indefinite strike action since February 5, 2021, and had threatened the action would last until the government meets their demands.