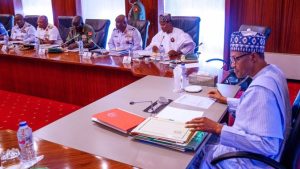 The Presidency has insisted that the service chiefs replaced by President Muhammadu Buhari did not fail in their service to the nation.

Speaking on Channels Television’s Politics Today, the Special Adviser on Media and Publicity to the President, Femi Adesina stated that it was only time to inject fresh energy in the fight against terrorism and other security challenges confronting the country.

According to the presidential aide, President Buhari commended the outgoing service chiefs.

He said: “The fact that they have to leave today does not mean they have failed. No, I wouldn’t think so. It is just that it is time to have fresh energy, fresh blood and fresh ideas in the theatre of battles where the military is involved in the country.”

Naija News reports that President Buhari on Tuesday appointed new service chiefs for the nation after he sacked the previous ones.

This was confirmed on Tuesday in a tweet from Femi Adesina in which he also quoted the president as appreciating the outgone service chiefs for their performance.