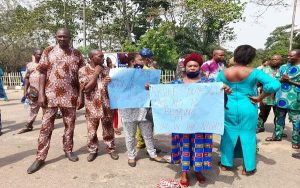 Residents of Akure on Thursday took to the streets to protest in support of Governor Oluwarotimi Akeredolu’s seven-day ultimatum to herdsmen to vacate forest reserves in the state.

It was gathered commercial drivers, forest guards, farmers, and traders stormed the streets to ask the herdsmen to immediately leave the reserves and make themselves known to the government.

The protesters also asked the state government not to be intimidated by the Presidency or anybody in the federal government.

According to the protesters, governor Akeredolu should not to back down on his directive, saying that all criminals must vacate the reserves.

He said commercial drivers were no longer safe in the state as a result of kidnapping, banditry, and other criminal activities in the state.

Adejo said his members need protection as herders attacked them with impunity as well as kidnapped them before now.

Naija News had reported that Akeredolu ordered herdsmen in the state to vacate the forest reserves within a period of seven days counting from Monday, 18th January.

The governor also banned night grazing as well as highway and under-age grazing in the state.

According to Akeredolu in a statement issued on his official Twitter handle, the actions are part of efforts by the government to combat cases of kidnappings and other security challenges in the state.

Citing security and investigative reports, the Governor noted that some criminally minded persons hiding under the guise of herdsmen have been exposed as responsible for the many cases of kidnappings and other crimes prevalent in the state.

He stated that the actions taken are to curb such criminal activities in the state.

“Today we have taken major steps at addressing the root cause of kidnapping, in particular, and other nefarious activities detailed and documented in security reports, the press and debriefings from victims of kidnap cases in Ondo State.

“These unfortunate incidents are traceable to the activities of some bad elements masquerading as herdsmen. These felons have turned our forest reserves into hideouts for keeping victims of kidnapping, negotiating for ransom and carrying out other criminal activities.”

“As the Chief Law and Security Officer of the State, it is my constitutional obligation to do everything lawful to protect the lives and property of all residents of the State. In light of the foregoing, the following orders are hereby issued:

1. All Forest Reserves in the State are to be vacated by herdsmen within the next 7 days with effect from today, Monday 18th January, 2021.

2. Night-grazing is banned with immediate effect because most farm destruction takes place at night.

3. Movement of cattle within cities and highways is prohibited.

4. Under-aged grazing of cattle is outlawed.

“Our resolution to guarantee safety of lives and property within the State shall remain utmost as security agencies have been directed to enforce the ban.”

“In its usual magnanimity, our administration will give a grace period of seven days for those who wish to carry on with their cattle-rearing business to register with appropriate authorities,” the governor noted.