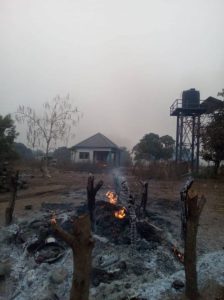 The Seriki Fulani of Oyo State, Saliu Abdulkadir, on Saturday disclosed that none of his children was killed during an alleged attack on his house in Igangan.

It was also reported that the attack on Abdulkadir’s house happened shortly after a pro-Oodua Republic agitator, Sunday Igboho, and his followers left Igangan.

Seriki while speaking with SaharaReporters noted that his children and first wife sustained gunshot injuries and are responding to treatment at an undisclosed hospital.

Meanwhile, the Chairman of Miyetti Allah Cattle Breeders in Oyo State, Ibrahim Jiji, has called on the state Governor, Seyi Makinde, to see that Igboho is arrested.

Jiji in his statement said Yoruba people are doing well in other part of the country and are not being intimidated.

According to him, many Fulani people in the North are now afraid to visit the southwest states for fear of being attacked.

“We want government to arrest Igboho now. He is not more powerful than the whole country. We want Makinde to consider us as part of his children. We also voted for him in 2019 and we want him to extend his hand of fellowship to us.”

“Many of the affected people cannot recognise their family roots in the North again. In fact, many of them have not gone to their villages before. We are ready to work with Oyo State government to maintain peace and order,” he said.