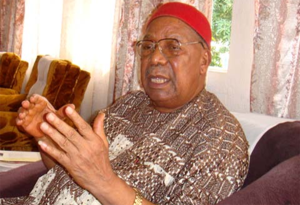 Nigeria’s first minister of Aviation, Mbazulike Amaechi, on Thursday, lamented over the state of things in Nigeria.

Amaechi in his statement said Nigeria has to start all over again, as the country is no longer what was founded.

The former Minister while speaking at a zoom meeting organized by Dele Momodu of the Ovation Magazine and Mazi Ezeoke said Nigeria has deviated from the original constitution of the country.

He noted that there is a need for a new constitution where every Nigerian will be involved to speak what he/she wants.

Amaechi said: “I am sad. This is no longer the country we founded. This country has to start all over again. You can’t beat someone and ask him not to cry. If you don’t like us, let us go. I don’t want to go, I believe in one Nigeria”.

Recall that Vice Presidential candidate of the Peoples Democratic Party during the 2019 general elections, Peter Obi, on Wednesday said Nigeria is collapsing because many incompetent people are recruited in positions.

The former Anambra State Governor stated this when he commissioned the Constructed Internal Road Phase 2 in Isiokpo, Ikwere Local Government Area of Rivers State alongside the state Governor, Nyesom Wike.

Obi said, “The reason Nigeria is not working today is that people have been recruited based on sentiments.”

“if we have to recruit you to be local government chairman, governor, vice president, president, and minister, it must be based on capacity and competence, which are viable not what we are doing now and the country is collapsing”.