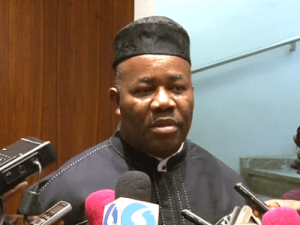 The Minister of Niger Delta Affairs, Senator Godswill Akpabio, has denied offering the sum of $5 million in bribes to the Attorney General of the Federation and Minister of Justice, Abubakar Malami (SAN).

An online publication (not Naija News) in its social media handle had claimed Akpabio offered Malami $5 million bribe to facilitate the appointment of Effiong Akwa as the Sole Administrator for the Niger Delta Development Commission (NDDC).

The Attorney General has however denied receiving any bribe to facilitate the appointment of the new NDDC boss.

Reacting through his special adviser on media, Anietie Ekong on Sunday, Akpabio threatened to sue an online publication over the report.

According to the former lawmaker, the allegation was a “figment of the imagination of mischief makers which was published without proof.”

The minister said President Muhammadu Buhari approved the appointment of Akwa after a Federal High Court in Abuja in suit number ABJ/CS/617/2020 filed by a CSO: Forum for Accountability and Good Governance restrained the Interim Management Committee of the NDDC from performing the functions of the board and accessing the Commission’s offices and files.

He accused the online newspaper of trying to discourage the ongoing forensic audit of the NDDC as ordered by Buhari in order to bring development to the Niger Delta region.

“The authors of the fake news should be ready to back up their claim or face the full wrath of the law.