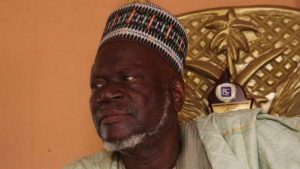 A youth group in Kwara State, Kwara South Movement, on Saturday warned the Sarkin Fulani Oyo State, Saliu Abdulkadri, to be law-abiding during his stay in the state or he would get evicted.

Igboho called on criminal herdsmen in the local government area to vacate the community following cases of kidnapping, rape and other criminal activities.

The Yoruba activist accused the Fulani leader in Oyo State of harbouring the herders allegedly kidnapping and killing residents of the community.

The group in a statement released through its coordinator, Saheed Olayinka Odofin, and secretary, Adeyinka Adeoye, called on Abdulkadri to be law-abiding in his activities in the state.

The statement read, “The attention of Kwara South Movement has been drawn to the relocation of the displaced Sarkin Fulani of Igangan in Ibarapa local government of Oyo State, Salihu Abdulkadir, and his family to Kwara State following a misunderstanding with Sunday Igboho as well as the host community.”

“This cautionary message became necessary as Fulani In Igangan reportedly moved to Buari/Okerimi Near Oro Boundary of Kwara South which is within our territory.”

“We all know Kwara State for its harmony. Any attempt to jeopardize this peace and tranquillity will be resisted by Kwara South Movement. We, therefore, use this opportunity to warn the Sarkin Fulani of Igangan to be guided in his activities during his stay in the State or he face another eviction.”

“Kwara South Movement also call on the Kwara State Governor, Mallam Abdulrahman AbdulRazaq, to be proactive in his administrative duties by securing the life’s and prosperity of the citizens in the state against any criminal act by the embattled Sarkin and his family.”

“We, therefore, urge the security agencies in the state to be at alert because any criminal activities won’t be taken lightly in the state during the stay of this Sarkin Fulani.”