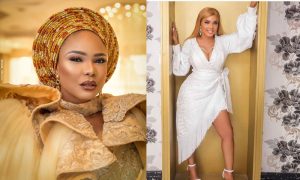 Nollywood star actress, Iyabo Ojo has confirmed that she actually did surgery on her stomach to have a flat tummy.

The 43-year-old mother of two while explaining her reason for the tummy surgery said she needed to get rid of the extra skin that usually comes after childbirth.

“You know when you are a celebrity or in the limelight you have to take care of yourself because a lot of people look up to you, you have fans and when you are not looking good they are worried,” she said in an interview with Daily Independent on Saturday.

The actress also revealed that though she plays with her children, she’s very strict when it comes to parenting.

“A very strict one, I am too strict, my children know it. I play with my children, but they know that I can go from zero to a hundred,” she said.

She added that she would soon debut a programme where she intends to talk about her past and private life so people can further understand her personality.

The pastor made the submission on Friday as he also declared that he has started praying for Ednut and he is sure the celebrity will come out victorious.

Before then, the photo and video sharing social networking service had earlier suspended Ednut’s account [@tundeednut] which has over 2 million followers for allegedly violating its community terms.

However, according to Apostle Omashola in a recent video shared on social media, Tunde Ednut is fighting a spiritual battle.