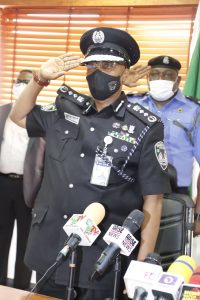 The meeting, which held at the Force Headquarters, Abuja, on Friday, 9th April, 2021, is part of efforts by the new Police leadership to critically diagnose the security threats in the region and evolve new policing strategies and responses towards tackling the threats.

It will be recalled that some states in the southeast, most notably, Imo have come under recent attacks by gunmen suspected to be bandits.

The IGP, while noting that the South-East and South-South geo-political zones of the country are very critical in the socio-economic stability and growth of Nigeria, says no intelligence, operational and administrative efforts should be spared in ensuring that the security challenges in the zones are surmounted.

According to information made available to Naija News by the Force Public Relations Officer, CP Frank Mba, the IGP gave marching orders to the Strategic Commanders to rejig the security architecture in their Areas of Responsibility (AORs) and work with relevant stakeholders in restoring law and order.

The IGP further directed the Command Commissioners of Police and their supervisory Zonal Assistant Inspectors-General of Police to return to their AORs and implement resolutions reached, especially on intelligence-led and community-driven operational strategies, to ensure the security of lives and property in the region.

The IGP called for the support of citizens, noting that the operational strategies shall be within the framework of citizens’ consent, trust and the rule of law.

In another development, the Acting Inspector-General of Police, Usman Alkali Baba, has announced the redeployment, appointments, and reappointments of top police commanders.

The police chief made the announcement in a statement on Friday signed by the Force Public Relations Officer, CP Frank Mba.

According to the statement, IGP Buba has appointed AIG Hafiz Inuwa as the Force Secretary and member of the Force Management Team.

The statement noted that Inuwa takes over from AIG Mustapha Dandaura who has been redeployed to Zone-7 Police Headquarters, Abuja.