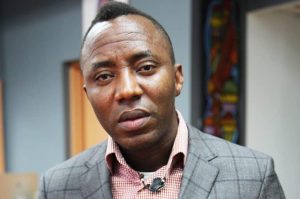 Former presidential candidate, Omoyele Sowore, has accused politicians of converting the dividends met for Nigerians for their personal interest.

The human rights activist disclosed that he started activism in 1992, fighting for the rights of Nigerians and speaking against bad government.

He further stated that he fought for democracy as a student leader and when it came, some corrupt people emerged as leaders in the country.

Sowore added that the country needs leaders with revolutionary mindsets and ideas who would stop the “garbage in and garbage out” politicians who had continued to recycle themselves in the corridors of power.

He said, “What I was fighting for in those days was for this country to have democracy and democracy came.”

“Most of them when we were student leaders, they were hiding under their beds. The moment the country was liberated, they came out. Some of them with stolen wealth, some of them were drug dealers, drug addicts, kidnappers and armed robbers.”

“They put on new garb and became governors, senators and members of the House of Representatives who you see today; other decent positions, which are supposed to go to decent Nigerians, were allotted to these criminal elements.”

“They don’t want a society where anything works. But for us who are asking for a better society, we are the enemies of the state. So we are dealing with a criminal state. We are not surprised; I have been through this for over 30 years of different types of persecution.”

“Governance in Nigeria has become a criminal enterprise, with the wrong people governing.”

Sowore when asked why he was handcuffed to a magistrates’ court, while Kabiru Sokoto, who masterminded the bombing of Mandala Catholic Church in 2011, was treated differently, Sowore said the system in Nigeria empowers criminals in the society.

He added that Sokoto was a hero of a tyrannical regime.

“It is very important to understand the context in which oppression operates. When you have an oppressive system and a tyrannical government, it is a system that empowers criminals in society. That is the kind of society they want; to create division and bigotry.”

He said the only way the government could gain the trust of Nigerians was to deliver on the social contracts which form the core responsibilities of government.

“People cannot just trust the government because it is walking around with handcuffs and AK-47 rifles, television and social media propaganda. Trust comes out naturally. It comes out between the governed and the governors, but that is not the case in Nigeria,” he noted.