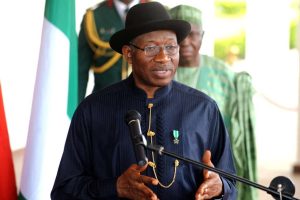 Former President of Nigeria, Goodluck Jonathan, has debunked the report making rounds that he is planning to join the All Progressives Congress.

Jonathan in a statement on Monday noted that he is still a member of the Peoples Democratic Party, PDP.

The former President while speaking at the supreme court victory/ thanksgiving service of the Bayelsa State governor, the PDP “as a friend that carries people along.”

There had been speculations that the ruling All Progressives Congress is planning to field in former President Goodluck Jonathan and the Governor of Kaduna State, Nasir El-Rufai for the 2023 presidential election.

Top sources which spoke with SaharaReporters noted that the former President is being considered by the party because of his influence in the southern region, while El-Rufai is being used as vice for him to become president when the presidency is again zoned to the North.

However, the interim Caretaker Committee Chairman of the APC, Mai Mala Buni has  denied the speculation.