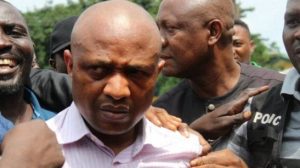 Suspected kidnapper, Chukwudimeme Onwuamadike, popularly known as Evans has denied all kidnapping allegations levelled against him by the Lagos State Government.

The Billionaire suspected kidnap kingpin in his statement said, he is a legitimate businessman.

According to P.M Express, Evans told the ruling judge, Justice Hakeem Oshodi, that his name is not Evans, he added that he admitted to being a kidnapper immediately after the Police killed four suspects, whom he claimed refused to cooperate with them.

Recall that Evans was arrested and paraded alongside his members at the Lagos State Command, where he confessed that he is into kidnapping and how he made Billions of Naira in the process.

Evans, however, changed his statement when he was represented by his counsel, Victor Okpara.

The suspected kidnapper is standing trial alongside Uche Amadi, Ogechi Uchechukwu, Chilaka Ifeanyi, Okwuchukwu Nwachukwu and Victor Aduba, over the alleged kidnap of Mr Donatius Dunu, who is the Chief Executive Officer of Maydon Pharmaceutical Ltd.

The six defendants were arraigned on 30th August 2017, on two counts of conspiracy and kidnapping.

While testifying before the Court, Evans stated: “My name is Chukwudumeme Somtochukwu Onwuamadike. I am from Nnewi North Local Government in Anambra State.”

“I live at Fred Shoboyede Street, Magodo Phase II Lagos. I am a businessman and I deal on ornaments and Horlicks”.
When asked if his name or nickname was Chukwudumeme Onwuamadike alias Evans as alleged by the prosecution, he replied, “My lord, my name is not Evans and I don’t have a nickname”.

In his defence over the alleged offence of conspiracy and kidnapping, alongside other defendants, Evans narrated that he has never met the other defendants before, except on the day the Police paraded them at Area F, Ikeja.

The alleged kingpin said: “What I can remember is that on Saturday, 10th June 2017, a group of armed Policemen stormed my residence at Magodo”.

“On that fateful day, which was a Saturday morning, I heard some people banging at my gate and I instructed my security guard to find out who it was. The security man returned to inform me that it was the Police and I instructed him to open the gate for them.”

“When he opened the gate, I came downstairs to meet with them. But immediately I opened my security door, they rushed at me. The Police officers that came to my house were: Mr Philip Elelenwa, Mr Idowu Haruna, one Mr Christian and other Police officers.”

“They asked if I was the one living in the house and immediately I replied yes, Mr Philip screamed, ‘Oya get in’. “They started beating me and hit my head with a gun. I was beaten to the ground.
They dragged me back into the house and ransacked my bedroom, my wife’s and children’s bedroom. They searched everywhere and packed some items out of my house.”

“They brought me downstairs again and Mr Philip ordered them to handcuff me. Then, I began asking them what offence did I commit. They told me to shut up that I am a criminal; armed robber, ritualist etc. They called me all sort of names. I now begged them to allow me to call my people but they refused.”
“When I begged them to call my lawyer, they screamed at me that if I mention a lawyer again that my own is finished. That was when they pushed me inside one of the vehicles they came with and drove to Ikeja, somewhere around Area F Command.”