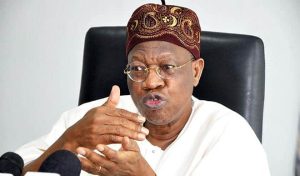 Nigeria’s Minister of Information and Culture, Lai Mohammed has said that granting amnesty to bandits, kidnappers or any notorious group is not a new thing in the country.

Naija News understands that the minister stated this while defending critics on Zamfara State Governor, Bello Matawalle, for granting amnesty to bandits terrorising the state.

Mohammed who appeared on AIT’s ‘Kakaaki’ show on Wednesday said, the Federal Government would not restrict governors from addressing the security challenges in ways peculiar to their respective states.

According to him, the governors as chief security officers of their various states were in the best position to address security challenges in the way that best suit them.

Recall that Zamfara State governor had granted amnesty to Auwalun Daudawa, a notorious bandit who led his gang members to series of kidnapping including the abduction over 300 schoolboys from Government Science Secondary School, Kankara, last year.

A development that received a barrage of reaction and criticism among citizens. However, Mohammed during the live programme on Wednesday, said there was nothing wrong with granting amnesty to criminals if the purpose was to restore desired peace in affected areas.

He said: “When you are fighting insurgency, you use both kinetic and non-kinetic (means). Granting amnesty to notorious drug barons, notorious militants is not a new thing, it is not unique to Nigeria.

“You need to be in the shoes of the Zamfara State government or governor to appreciate what are the issues at stake (and) why he has done that. Don’t also forget that the state governors are their own chief security officers.

“When you are dealing with insurgency, kidnapping, banditry, you are interested in the bigger picture; how do we restore peace? If granting amnesty to one notorious kidnapper is going to give me peace in my state, I might take that decision. If granting amnesty to one repentant warlord would help me capture a thousand bandits, I might take that decision. Don’t just look at what is in the public place, understand the very high complexity of managing insurgency and banditry.”

The minister further said there were conditions attached to granting amnesty to criminals, adding that the state governors were in the best position to determine who meets these conditions and who should be granted amnesty.

“The governor of a state understands the dynamics of the state and takes decision but it will be unfair of us to criticise him (Matawalle) without knowing what he did and I want to believe the governors work together with the security forces in their own state, so, it is not as we think,” he added.