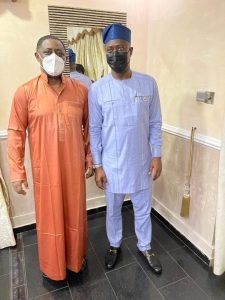 Naija News reports that the former Minister made this known in a post on his Twitter page on Sunday.

He wrote: “With my friend and brother Governor Seyi Makinde of Oyo state. Spending time him and having discussions about crucial national issues is always a pleasure and a joy.

“Oyo state is in very good hands indeed and I am very proud of him and all his efforts.”

In another tweet, Fani-Kayode asked some Nigerians to stop obsessing about which party he belongs to and focus on the clash between Hausa/Fulani and Yoruba in Oyo State.

“Whilst some are busy obsessing about which party FFK belongs to parts of Nigeria have been on fire and many slaughtered.

“What happened in Shasha, Ibadan between the Hausa Fulani & Yoruba was horrific. I wholeheartedly CONDEMN it. Many were killed on BOTH sides.

Recall that three people were reportedly killed in a clash between Hausa speaking people and the Yorubas at Shasha Market.

It was learnt that the disturbing event led to the destruction of shops and properties by hoodlums who took advantage of the clash. It was reported that residents were forced to flee the troubled area around 5:30 pm.

Some lucky residents were said to have hurriedly picked a few clothes with them as they were unsure whether the violence would not escalate. Confirming the report to newsmen, police operatives revealed that one person died in the attack, contrary to the claims by traders.

Following the clash, Governor Makinde shut down the market and declared a 24-hour curfew in the community.