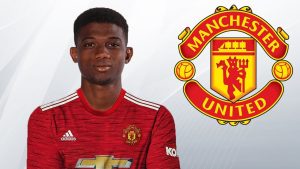 The 18-year-old new signee while interacting with the club’s media said he hoped to win the EPL and Champions League trophies with United.

Naija News recalls that Manchester United signed Diallo for £36million during the last summer deadline day but had to spend half of the season at Atalanta.

However, upon his arrival at Old Trafford, United during the last weekend confirmed that Diallo will wear the No. 19 Shirt.

He said: “I’m a little bit too anxious to say this given it’s just the start [of my time here] but my dream is to win the Premier League and the Champions League with Manchester United. That is my aim and goal,” he told Manchester United media team.

“Eric will be a definite reference point for me. I’ve actually already been in touch with him over the last few months and we’ve been chatting.

“I’ll be asking him for advice and will be listening to all he says, and also the other players who speak French and Italian like [Paul] Pogba for example, he will be another good reference point for me,” he added.

The French striker will join the Spanish side until the end of the season with an option of buying him permanently for around 35 million euros, Naija News reports.