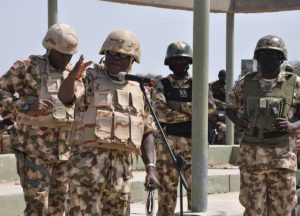 Yahaya made this call after the elimination of the sect’s commanders and fighters.

It was disclosed that since the commencement of Operation Tura Takai Bango in January, more than 50 terrorists have been killed.

Yahaya during his operational your commented soldiers for their victories in Bama axis, Pulka, deep into Boko Haram and ISWAP camps.

The General urged troops to remain courageous and more determined to clear the remnant terrorists in the general area of Sambisa forest.

“You must imbibe the right attitude as professional soldiers, you must not give room for laxity and assumptions. When you see the terrorists, deal decisively with them. Pursue them, don’t spare their lives”, he said.

Yahaya also commended the Multinational Joint Task Force (MNJTF) involved in some of the operations.

Ibrahim assured that troops were in high spirits to sustain the war against insurgency.

Yahaya also visited the Shehu of Bama, Umar Kyari Umar El-Kanemi in appreciation of his support and cooperation of the emirate.

In a related development, two senior Boko Haram commanders have escaped while other ranking militants were killed after Nigerian troops overran their camps in an area straddling Yobe and Borno states.