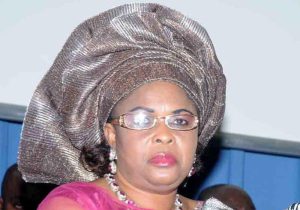 The Federal High Court sitting in Lagos, on Monday fixed April 13 for the hearing of an application seeking the final forfeiture of the sum of $5.8million USD and another ₦2.4 billion, said to have been illegally acquired by former President Goodluck Jonathan’s wife, Dame Patience Jonathan.

The date was fixed by the presiding Judge, Justice Chika Obiozor after lawyers involved in the matter appeared before him.

Recall that the Economic and Financial Crimes Commission in 2017 filed the suit seeking the forfeiture of the sums to the Federal Government.

The case was assigned to Justice Mojisola Olatoregun, who retired from the bench in 2019.

Justice Olatoregun before her retirement in 2019 ordered the temporary forfeiture of the funds which were saved in Skye Bank Plc and Ecobank Plc respectively.

This decision was affirmed by the Court of Appeal and the Supreme Court.

At the resumed hearing of the matter today, EFCC’s counsel, Mr Abass Muhammad, narrated to Justice Obiozor the journey of the matter.

“This matter is a suit instituted before your learned brother; Justice Olatoregun now retired, where we prayed for the final forfeiture of the sum of $5. 781, 173. 55 million USD, warehoused in Skye Bank Plc and N2. 421, 953, 502. 78 billion, a property of LA Wari Furniture and Bathes in Ecobank Plc.”

Lawyers to the defendants, Mr Kolawole Salami and Ige Asemudara aligned with the prosecutors’ submission but submitted that the matter ought to commence ‘denovo’, (afresh) since it’s before a new court.

After listening to all the submissions, Justice Obiozor, said he could not upturn the exparte order made by Justice Olatoregun, but he would proceed with the hearing of the application for final forfeiture.

Parties then agreed to adjourn the hearing of the application to April 13.

The commission had told Justice Olatoregun that the N2.4billion was found in an Ecobank Nigeria Ltd account in the name of La Wari Furniture and Baths Ltd.

The company is the second respondent in the suit.

Urging the court to order the final forfeiture, the EFCC said: “The $5million was not the first respondent’s (Mrs Jonathan’s) legitimate earning.”

“She was a public servant and a salary earner. The sums cannot be her legitimate income. We urge the court to agree with us and forfeit the sum to the Federal Government.”