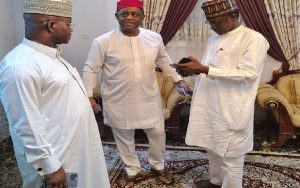 The media aide to Governor Abdullahi Ganduje of Kano State has reacted to the rumours that former Aviation Minister, Femi Fani-Kayode is planning to return to the All Progressives Congress (APC).

Salihu Tanko Yakasai, special adviser on media to the Kano governor, took to his Twitter account on Monday evening to condemn the alleged move by the former minister to rejoin the ruling party.

Yaksasai opined that Fani-Kayode might not be welcomed in the party (APC), saying that he does not understand the reason some APC leaders are meeting with the PDP chieftain.

He wrote: “I honestly don’t think I understand Nigeria’s political space anymore. What it is this again dan Allah?”

It will be recalled Fani-Kayode reportedly met with the Chairman, APC Caretaker/Extra-Ordinary Convention Planning Committee and Governor of Yobe State, Mai Mala Buni, and Kogi Governor Yahaya Bello at a Guest House in Abuja.

In a tweet via his Twitter handle on Monday, Fani-Kayode said he paid a courtesy visit to the governor to discuss some issues concerning the latest happenings in the country.

Fani-Kayode said the visit which was a friendly one, provided a frank, candid, fruitful, and productive discussion about Nigeria.

The PDP chieftain called on all Nigerian politicians to come together without bitterness, and discuss ways to solve the challenges facing the country.

Fani-Kayode also urged Nigerians home and abroad to unite as one to save the country.