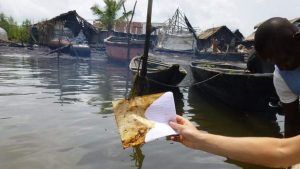 The Supreme Court of the United Kingdom has ruled that more than 50,000 Nigerians living in polluted areas can sue Royal Dutch Shell in British courts.

According to a report on BBC, the court said they had evidence that the oil company in the towns of Ogale and Bille in the Niger Delta was involved in polluting the environment.

Royal Dutch Shell did not dispute that pollution had been caused but argued it could not be held legally responsible for its Nigerian subsidiary. Shell is responsible for about 50% of the delta’s oil production.

The Supreme Court overturned the decision of the Court of Appeal and the verdict was a victory in a five-year-old case.

The people of the Niger Delta in Nigeria say that years of environmental pollution have taken their toll on their health and social well-being.

The latest ruling by the British apex court comes two weeks after a Dutch Court ruled that the oil giant is liable to pay four farmers in the Niger Delta compensation over oil pollution in their communities.