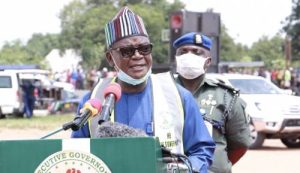 The Governor while speaking during the swearing-in ceremony at Government House in Makurdi urged them to be diligent in the discharge of their duties and justify the confidence reposed in them.

Ortom made reference to some people in the past who have been so appointed, only to fail to live up to the responsibility and expectations of the office they were appointed into.

He also urged them to avoid all temptations of office such as corruption, negligence, laziness, and others noting that he won’t shield them from investigation and prosecution by anti-graft agencies if found wanting.

The Governor also urged the workers in the state civil service to cooperate with the new appointees and work together to achieve success.

Apir Ityu Ayaka who spoke on behalf of other new Permanent Secretaries, promised to discharge the responsibilities of the offices they’ve been appointed into, and also appreciated the governor for finding them worthy to serve in such capacities.

Naija News had earlier reported that Igboho’s supporters set up a Gofundme page for the activist to raise the sum of £100,000 (N51.8m) for him to buy buses to help in the movement of his men in bid to flush out killer herdsmen.

The fundraiser, which was initiated by Maureen Badejo, a blogger and activist based in the United Kingdom, has so far garnered £14, 824 (7.6m) with over 446 donations made.

Dami who is a lawyer called on Nigerians to desist from raising money for Igboho.

According to her, Igboho was an active participant in the last Ife-Modakeke crisis, where lots of lives were lost.