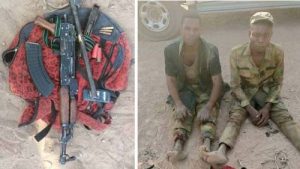 According to Vanguard, the armed men were dress in military camouflage.

However, two of the armed men who set fire on houses in the community were apprehended by the joint security operation in the state, also called Operation Whirl Stroke, OPWS.

The operation led to the recovery of weapons from the criminals

The Special Adviser to the Governor on Security, Col. Paul Hembe (retd.), stated that the timely intervention of the OPWS personnel prevented what could have been a major bloodbath in the town.

He said: “These were armed men in military camouflage said to be loyalists of the late Gana. They stormed the area, killed three persons and also burnt down houses in the community. Luckily, while this was going on, information reached personnel of Operation Whirl Stroke who stormed the area, apprehended two of the armed men and also recovered their weapons which included live ammunition, an AK-47 rifle and a locally-made gun.”

The State Security Council last week, imposed a dusk-to-dawn curfew on Katsina-Ala and Ukum councils to curb insecurity in the state.

Recall that Gana last year surrendered and was killed by the military.

However, after his controversial death, reports emerged that he had told his followers to avenge his death should anything happen to him.