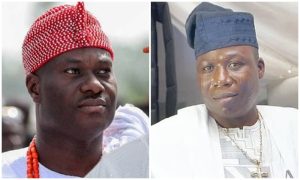 Yoruba activist, Sunday Adeyemo, popularly known as Sunday Igboho, has been advised by the Ooni of Ife, Oba Adeyeye Ogunwusi, not to take laws into his hands.

The monarch who commended Igboho for his stand against crime urged him to allow the Oyo State Governor, Seyi Makinde, take charge and handle the security challenges in the state.

Oba Ogunwusi while speaking on Arise TV on Wednesday said, “Let us be very objective. He (Igboho) is being a mouthpiece for the downtrodden. He came up and everybody is listening now but my advice to him as a traditional ruler is that he needs to be very careful so that the politicians won’t hijack the whole motive from him.”

“He has done well and we’ve already praised him but he shouldn’t take laws into his hands. We have the governor there, he is the chief security officer of the state and Mr President has invited him (Makinde). Let the right people that are being authorised to do what is right do it.”

“We know that the bandits are everywhere. He shouldn’t take laws into his hands. We have laws in this country and we should follow it. Let the right people chosen do and follow what they are supposed to do.”

The monarch who met with President Buhari in Aso Villa, Abuja, on the insecurity affect South-West, said the issue must not be sensationalised all in the name of politics.

In a related development, President Muhammadu Buhari on Tuesday during a meeting with the new service chiefs noted that his administration has not found the fight against insurgency easy.

The President in a statement released through his spokesman, Femi Adesina, called on the service chiefs to be patriotic, saying the country was in an emergency.