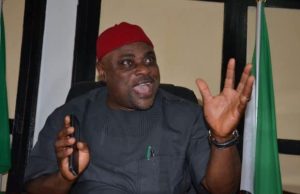 The National Chairman of All Progressives Grand Alliance (APGA), Victor Oye, has dismissed his suspension by the National Working Committee (NWC) of the party.

Recall that the APGA NWC on Tuesday announced the suspension of Oye and appointed Jude Okeke as acting National Chairman of the party.

APGA accused them of anti-party activities, gross misconduct, and conduct capable of bringing the party’s image to disrepute among others.

Furthermore, the party’s NEC also nullified the disqualification of five aspirants for the Anambra State Governorship Election who were previously disqualified by the Victor Oye-led leadership.

Reacting in a telephone interview with the NAN in Awka, Oye said it had become a tradition in the party that each electioneering period, some people would want to steer trouble to cause confusion for personal interests.

Oye said: “It’s what we see in every primary election, so am not perturbed. If this were in more civilised climes, these people will be arrested and jailed.

“There is a procedure and you have to give INEC a notice to be able to convene a meeting of a National Working Committee (NWC). It is the chairman of National Executive Committee that convenes NWC. So, my purported removal is laughable and rubbish.