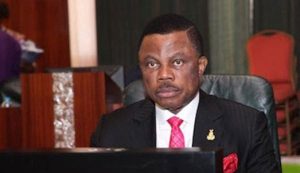 The Peoples Democratic Party on Wednesday called on the Governor of Anambra State, Willie Obiano, to prepare to hand over to the party in 2022.

Obiano who emerged as Governor on the platform of the All Progressives Grand Alliance will end his tenure on March 17, 2022.

Nwangwu in the statement said, “APGA has failed woefully in all ramifications and as such, should be preparing to hand over to PDP which is ready to give Anambra State a quality, responsible and responsive government.”

Nwangwu further stated that no amount of distraction would stop the people of the state from showing APGA the way out in 2022.

Nwagwu said, “APGA government has touched everything good handed over to her with leprous hands and relegated Anambra State from being the best in Nigeria to a laughing stock.”

Reacting, the National Coordinator of APGA Media Warriors, Chinedu Obigwe, said, “PDP will continue daydreaming of returning to power in Anambra State but making it a reality can be likened to a camel passing through the eye of a needle.”

“The people of Anambra State will not go back to their vomit because they have genuine reasons for dumping PDP.”

Meanwhile, members of the ruling All Progressives Congress (APC) party in Kwara State on Wednesday engaged in a free for all fight during a stakeholders’ meeting.

The meeting which was reportedly held to find a solution to the lingering crisis in the Kwara chapter of the party which has already left APC factionalized in Kwara, however, turned bloody.