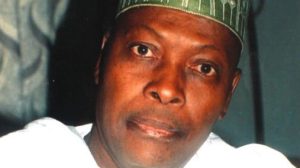 Second Republic lawmaker, Junaid Mohammed, on Thursday condemned the claim that its the turn of the South-East to produce Nigeria’s next president in 2023.

Mohammed in his statement said it would be difficult for the South-East to produce the next president with people like the leader of the Indigenous People of Biafra, Nnamdi Kanu and the former President-General of Ohanaeze Ndigbo, John Nwodo.

He further stated that the Southeast would need to form a coalition with other regions to produce the country’s President.

According to Muhammad: “I have never believed in this abstract called zoning and rotation of presidency.”

“If the Igbos believe they have a candidate good enough, they are allowed to contest.”

“For some years now, the Igbo ethnic group has been making some claims that they must produce the president, there must be restructuring without them telling us the meaning of restructuring and that the geopolitical zones should be converted into regions.”

“The reality is that their position is apolitical and nonsensical. I have no doubt that they can’t on their own bring about any change no matter who they associate with.”

“The idea that you will play politics on the basis of an ethnic group is unfortunate. The rest of Nigeria must make sure they allow you to produce the president ab-initio.”

“We are talking about a country of 200million people, who are you as a group, individual or a zone that the nation must concede the presidency to you ab-initio?”

“Look at the elections of 1999, Obasanjo would not have won that election with his own ethnic group, the Yorubas if he had relied on their votes. In most of the states and local governments, the election held; even in his Owu ward, Obasanjo did not win. I was with him physically and I know his reaction.”

“So you can see clearly that if anybody is to rely on his own ethnic group, local government, region or religion then none of those who did would be able to produce the president of Nigeria.”

“The president of Nigeria can only be produced by some coalition of people who have an understanding of themselves.”

“But, the idea that we should now concede the presidency to some people simply because they have an understanding with IPOB, a terrorist under Kanu and some hypocrites like John Nwodo and co who are the political wing of IPOB then you expect people to vote for you. If they want to produce the president, they have the constitutional right to do so but not at the exclusion of other Nigerians.”

“I remember in 2006, Nwodo came to Kano with a delegation and we held a meeting in the house of one-time Governor of Kaduna State, Brig. Jafaru Isa and Nwodo went on his knees begging that he should make him the president and I asked what he has to offer because only Kano can’t make him the president, he said yes that he was the president of the student union in Ibadan, what else nothing.”

“Now are these the kind of characters they are sending to us to vote as president? Despite serving two military administration’s, Nwodo recently went to London and said the Nigerian constitution should be condemned which they produced.”

“Now if you have gangsters’ and scoundrels like this in politics who are always in alliances with organisations like Boko Haram or IPOB, OPC then you can see we have a long way to go.”