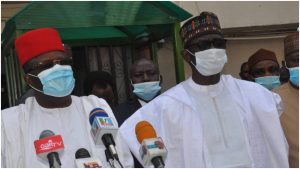 The Governor of Ebonyi State, Dave Umahi, on Wednesday met with the National Chairman of the All Progressives Congress Caretaker Committee, Mai Mala Buni.

The meeting between Governor Umahi and the Yobe State Governor was held at the party’s national secretariat in Abuja.

Umahi while speaking on the clamour for South-East 2023 presidency, said the APC leadership will decide.

“It is a party affair. Party discipline requires that you sit down and discuss issues. You advance your reasons and another person will also advance his.”

“And then the party as a family will take a position. Not even as a new member. Even if I am an old member I will not like to comment.”

Umahi said he had not visited the APC headquarters since he joined the ruling party last November.

He noted that his presence was not just about a visit “but to also appreciate the beautiful work the Chairman, my dear brother and colleague, Governor of Yobe State, is doing for our party, making it to be more digital”.

In another development, Governor Yahaya Bello of Kogi State has disclosed that former Minister of Aviation, Femi Fani-Kayode, has returned to the ruling All Progressives Congress (APC).

Bello disclosed this while speaking to journalists after revalidating his APC membership in the Okene area of the State on Wednesday.